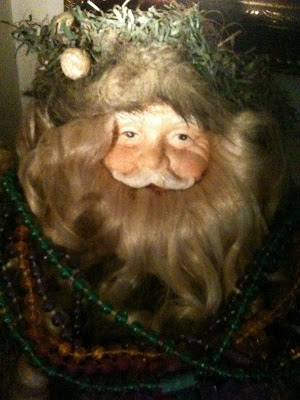 When I was little, every year Mama would get out the ornaments as Dad fought the tree stand to make the tree balance perfectly straight as nothing else would do. Nearby would be aerosol cans of spray-on snow and several boxes of silver tinsel. The tree would be decorated, colored bulbs replaced, tinsel strewn carefully then finally tossed willy nilly at the branches. Then my Mama would take out the little church.

This little church seemed to me to be a cathedral. Tall steeple, rosette stained glass over the unopenable doors illuminated from within by a single little bulb. I would kneel next to the table it was placed on and turn the key to the music box that played Silent Night and be overcome not really knowing why. To my five or six year old self this was a thing of beauty and it was probably the first time I shed tears over something beautiful. For many many years that church was the big memory of Christmases past.

I left home and I guess the little church was retired at some point, replaced by the innumerable Snowmen that Mama loved, and as a result, became inundated with as my sisters and I scoured malls and catalogues for the perfect new snowman for her each year. I think she's probably retired many of those by now too. She finally asked us to please not send her anymore. By then they were practically taking over her house.

When my daughter was born, I cried again over beauty. She was and remains the most beautiful thing I've ever seen. Over the next few years the soft memories are of her two year old self choosing ornaments for our own tree and particularly delighting in a fake hard candy garland held together with weak monofilament. The fake candy had to be restrung periodically over the years, but she loved it. We didn't have much money then, so we made a star for the top of the tree out of cardboard and tinfoil. Even when we could afford to replace it we didn't for a long time. Each year she chose two or three ornaments and they would get added to our collection along with those sent by family and friends. Eventually they became more sophisticated with porcelain doll angels added to the ones she had chosen at two and the clay/cookie bell she made in kindergarten. Each year they would be carefully unwrapped and delighted in, one by one, and hung very deliberately on our tree. If she didn't like the placement, she'd change it.

One year I labored over a tree skirt, having decided that I would make this thing entirely by hand. Plaid taffeta pieces for the top, crocheted lace for the edges and the softest red corduroy I could find for the bottom. I've always maintained that I put too much polyfil in it, but it made a nice cushion for wrapped presents. Sometime around my daughter's 7th or 8th Christmas I tied it around her waist like a skirt and plopped a Santa hat on her head. For the next nearly ten years, that was the expected tree trimming outfit and she was wearing it still when at about 14 she insisted that I'd been putting the lights on all wrong for years so she would now take charge of the branch fluffing and lighting. She'd force her dad up to put the fish ornament she'd chosen for him up high and she'd dance in the tree skirt as he pretended to be Frank Sinatra or Elvis depending on what holiday music we were listening to. Not big on tree trimming, he'd provide entertainment with his finger snapping Vegas lounge act, also done in a Santa hat usually worn a la the Coneheads. Even after she married she wore that tree skirt to trim the tree one snowy Christmas on the mountain.

My grandson was born and I cried at beauty again: the beauty of him and the courage and determination of his mother who didn't have an easy time of it. As difficult as it was, her damn mascara and eyeliner never smudged. She swears by Maybelline, or is it Cover Girl, to this day.

When the boy child was not quite two, the three of us went to buy some new ornaments and other sundry things at a Hobby Lobby nearby. It might have been the year of her own tree skirt. I'm pretty sure I made it for her, but she might have done it herself as she had decided to learn to sew. Funny. I remember her buying the fabric but can't remember if I made it. I think I'll say I did. As I pushed the cart down the aisle I noticed my grandson grabbing a Father Christmas that was half the size he was and was unfortunately sitting on the bottom shelf just within his reach. I had not planned nor budgeted for that fabric covered cardboard cone with glorious curls and a perfect smile. I tried the age old distraction technique, some bells in one hand, the Father Christmas in the other trying to put him back on the shelf. My grandson was not having it. He wanted that damn Santa and that's all he knew. He kept handing it to me to put in the cart and I was sure he'd drop it and break the porcelain face, so I figured I'd put it in the cart and then plop it up somewhere later where he wouldn't notice. But instead, after I put the boy in the seat on the cart (facing away from the cart's contents was my reasoning), he turned around and laser beamed onto that face. He was in love. I most assuredly wasn't going to rid myself of the big jolly guy, so I put something else back and Santa came home with us.

Soft memories, all. Bathed in light, music box sounds, fingers snapping and laughter. They all look like Marilyn in the Misfits: shot through a heavily vasolined lens so the harshness and wrinkles won't show.

When Katrina came all the ornaments and that Father Christmas were in storage at Tulane and Broad. We weren't allowed in to the UHaul place for months. The stuff in there had been tossed around and dropped and stewed and mold had grown in places that the hydraulic fluid from the elevator hadn't bathed with its oil. With no lights in there as the power hadn't been restored, we signed the "not your problem if we die in there" waiver and entered it like miners from Germinal. I still don't know how my Christmas Sinatra opened that door, just sheer stubborn foolishness probably. When our flashlights saw the interior there were no words. But right on top of everything, wrapped tight in a plastic bag we saw our grandson's Father Christmas, seemingly unscathed. 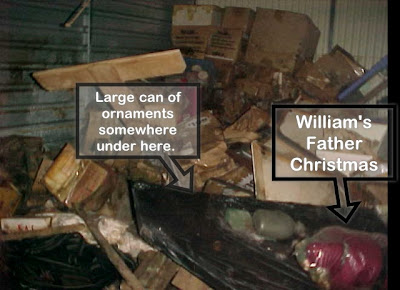 It would take weeks to get through all the boxes of books and other treasures in that storage unit, but that Santa came home with us that day, a trophy, a gift, our crown jewel. We finally found the giant can of ornaments and most of them were trashed, but those that did survive I passed on to my daughter to put on her tree. A continuity from one set of memories to another.

Since then I think I put up a tree one year, but mostly I find it too difficult. I know the tree skirt survived and I think it's in the shed. Some folks don't understand my reluctance to put up a tree, but for me it triggers too many sweet memories mixed up with some very difficult ones, like when you put too much salt in a soup--Martha Stewart and her "drop a potato in and it'll absorb the salt" be damned.

But before you think me a total humbug, consider this. That Father Christmas is never in a box, never out of sight. He lives year around on a table in my living room. Some of the stryrofoam birds and eggs were pretty damaged, but removing them from his nest didn't hurt him any, and now he wears a special kind of Mardi Gras bead, the ones my grandson called World Record Beads. They are the old plastic cheapos with the push clasp that you can connect to one another. He once tried to make the Guinness Book of World Records by connecting one continuous string around Jackson Square in order to raise money for his school library. He actually made it all the way around the Square but Guinness wasn't interested to his great disappointment. I think his Father Christmas likes his new decorations.

And two years ago my Mama sent me the little church, a real surprise. My Mama is really good at getting rid of stuff, so I thought it had probably gone the way of my Beatle cards and 45's. It's so much smaller than I remembered it, and not nearly so grand, made of a now-yellowed plastic with a decal instead of leaded stained glass. The music box still worked, but the little church was pretty brittle with age. I found that my Dad had evidently put a bulb in it that was too hot, so the bottom of it is a little bit melted. Okay. A lot melted. Last year my Christmas Sinatra rigged a small maglite in there so I could see the stained glass decal lit up again from the inside. It was the best gift ever and yes, there I was crying again as I looked at it and heard the music box's sappy Silent Night pinging. The little church sits right in front of the Father Christmas, also never boxed.

I keep those soft memories in sight now as I stupidly never filmed the great tree skirted elf in her determined glory nor did I record the Sinatra songs as interpreted by a Conehead. I regret that. But I can still see them, and hear them, and remember the laser beam gaze of a tiny boy staring at a curly haired Santa. I still well up at the beauty of those memories: my father cussing at the tree stand, my mother trying to keep the tinsel off the rug, a totally futile exercise, my sisters handing out stockings with our names on them, Sinatra hanging a fish just below a tin foil star, the years that I was lucky enough to watch a little girl choose giant plastic lollipop ornaments growing up to deck her own house with lights, and a little boy whose belief in a magical being keeps me believing even when it's hard to. Incredible gifts all. Such luck I've had.

And the music box still works.
Posted by Sam Jasper at 5:24 PM 1 comment: