Between St. Roch and a Hard Place 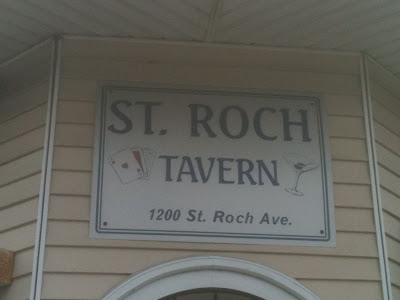 Neighbors. Seems I've been writing about neighbors one way or another for a little while now. I've always told people that I've never met friendlier people than reside here in New Orleans. Lately though I've found some anomalies in the tapestry of friendliness and neighborliness.

I remember someone telling me a story about a person who had moved into the French Quarter, a lifelong dream. It wasn't Bourbon Street, I can't remember exactly where, Dauphine or Burgundy Street perhaps, at any rate off the tourist path for the most part. After a little while they started complaining about the bar across the street, a bar that had been there for decades catering mostly to locals. I couldn't help but wonder upon hearing that story, if somewhere between the “hey this place has good closet space” and “I'll sign the lease” they really hadn't noticed that they were moving in across from a bar. Just didn't see it? I guess it's possible, unlikely, but possible. Now having moved there they wanted the bar to change its ways, quiet down, stop people from talking outside just by virtue of their entitled ass having moved in there. I was incensed when I heard that story.

When we moved into a house near a 24 hour market, we knew it was there and signed the lease anyway. The market has been here longer than we've been in the house, not decades, but longer than we have. We knew it was there when we moved in. We knew it was open 24 hours. We don't now get to get pissy and ask that they close at ten. We made the choice, as did the French Quarter resident. There seems to be a spate of whininess on the part of people in neighborhoods that they chose to move into, probably making that choice BECAUSE of the very things they now complain about. These neighbors seem to be multiplying. But that's a story for another day.

The neighbors in this story are different. They seem to be pursuing some sort of vendetta. 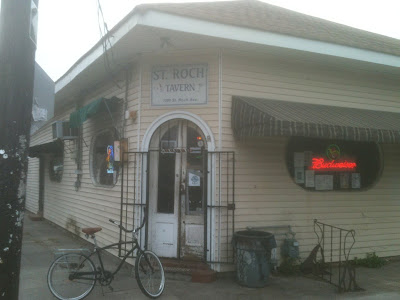 On the corner of St. Roch and Marais you will find the St. Roch Tavern. For those of you familiar with Buffa's on Esplanade, I've always been sure that the St. Roch was designed and/or built by the same bunch as they both sport unique windows that remind me of submarine ports, not that I've actually seen a submarine port. Long ovals, atypical design for windows in the areas surrounding both places. One day I'll verify my theory. But this isn't about architecture interesting though that may be. That too is a story for another day. This is about neighbors and livelihoods and gathering places.

Opening in the 1930's, Caranek's (which can still be found in a browser search, sometimes called Caranek's Ale House) was a neighborhood tavern. Operated by the family for nearly 70 years, it has always been a tavern. A local watering hole. A gathering place. Nine years ago the Caranek family sold it (I heard that one of the last of the Caranek owners recently passed away at the age of 84 meaning that that particular Caranek traipsed through those doors at about 4 years old. Remarkable.) About nine years ago the Caranek's sold it, but their name is still embedded in the tiles on the step and in the back of the place near the pool table. 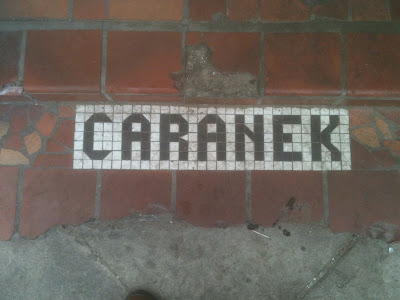 Having worked in casinos and eventually construction, John Victorson decided after spending a few days working underneath a house trying to avoid a large population of spiders that there had to be a better way to make a living. He bought the business, which by then had been renamed the St. Roch Tavern. While he might find a spider here or there behind the bar, most of the spiders he'd see now would be people in costumes with eight limbs. That sounded good to him and he happily threw himself into running the St. Roch. He also felt strong ties to the past and prided himself on keeping the neighborhood character of the place intact.

At the St. Roch on any given night, there is an interesting population of patrons: maybe some young black men playing pool being watched by young white Goth'd out kids sharing a pitcher and a hot dog, while an elderly lady plays the poker machines. Performers, musicians, little old ladies on a pension, skinny 21st century punks with puppets or puppies (used to be able to take your dog in there—no more, and that's too bad), a tall black man who suddenly turns around and belts out a song with pipes reminiscent of Sam Cooke, filmmakers, a large lady who hollers Who Dat and hugs you for every touch down the Saints make, poets and artists, sometimes one and the same person, will give impromptu readings of poems just now scribbled down on a napkin. 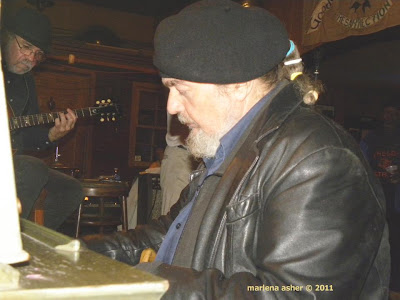 Along with that diverse group, occasionally the likes of Dr. John, Deacon John, Al “Carnival Time” Johnson, and others will show up, maybe do a set, maybe be there in support of a friend. That old piano in there has been played by many hands. Hands filled with talent, hands with no talent at all, drunken hands, awkward hands, and I-can-still-play-chopsticks hands. I'll have to ask if it's original to the place. It might well be.

In the last 18 months or so, St. Roch Tavern has been the target of a concerted effort to harass the bar itself and its customers. Launched by a neighbor, who in fact used to work there, it has become a purposeful, obsessive attack which has spilled out on occasion to the neutral ground. While there hasn't been a ticket for anything written inside or outside the St. Roch in four years, according to one of the bartenders there, the police have been called over petty complaints repeatedly by this neighbor. The City Council person, Kristin Gisleson Palmer, has also gotten complaints. Formerly a partner in the food concern at St. Roch (not an employee, the food suppliers are separate business entities), this neighbor is on constant alert from reports I've heard. Evidently this guy and his domestic partner's sole purpose is to get the St. Roch Tavern shut down. (Who they'll harass if that happens I don't know, but it has become clear that these people are folks who need to have someone in the crosshairs in order to be happy.)

The constant harassment has taken some dark turns, reports of customers allegedly being physically attacked by these neighbors aren't rare. Verbal attacks are apparently standard fare. The staff is walking on eggshells in order to avoid drama. The livelihoods of St. Roch staff are being endangered by an obsession for vengeance. I wish I could ask the neighbors why, but I have no doubt that the answer would make no sense to me.

Bar on the corner for 80 years. Neighbors doing all this? Moved into the neighborhood barely 2 years ago. We can't let this neighbor and his partner close down a business out of vengeance. Police were called on New Year's Eve. Police were called Krewe du Vieux night. The Fifth District police want to see a show of support from those of us who care about this place. They've been very good at communicating what they need from us and I applaud that. Let's help them by contacting them, signing petitions, patronizing St. Roch Tavern.

Hell, let's light some candles to St. Roch, who has a long list of causes he's linked to, including: protection from storms, skin diseases, cholera, knee problems, dogs and those who love them, bachelors, invalids, surgeons, gravediggers, second hand dealers, apothecaries, those falsely accused and epidemics. Let's get him on this.

As John Victorson said, “I just want St. Roch Tavern to remain the hub of the neighborhood as it has been for 80 years. I want it to be all inclusive.”

Too bad these two neighbors don't see things the same way.
___
Special thanks to Marlena Asher for the use of her photo of Dr. John with JD Hill at St. Roch Tavern a couple months ago.
Posted by Sam Jasper at 5:29 PM 25 comments: