Many years ago, a friend and I stood forlornly outside Madison Square Garden as David Bowie went on stage inside. We had been unable to find anyone with extra tickets. The show was sold out. That was too bad for us. Many years later, I remember considering a visit to New Orleans for Mardi Gras only to be told by someone in the know that I'd have to make hotel reservations a year ahead of time if I really wanted to do that. The hotel rooms would be sold out. Too bad for me. As a result I didn't make it to Mardi Gras until New Orleans became my home. My (affordable) rental lease guaranteed that reservation for any damn day I wanted.

Fast forward and it seems that many locals are standing forlornly outside rentable units being told it's too bad for them, they're sold out, the keys having gone to anyone BUT a local long term working renter. One article I saw last week quoted a local resident saying that come Monday morning her neighborhood was a ghost town: no one walking, no one on a stoop, no one around on her way down the block although it had been full of folks over the weekend. Many New Orleanians are watching their neighborhoods turn to short term rental havens (oh SO authentic!) filled with de facto hotels, no actual neighbors, ever rising rents and ever shorter supply and they're sick of it.

The folks in Barcelona and Copenhagen seem to be in the same boat but they're fighting back. Barcelona statistics seem to show that about 60% of the tourist lodgings in that city are now short term AirBnb/VRBO, etc as opposed to what most reasonable folks think of when they think of the word “hotel.” In parts of Barcelona the same issues are arising: rising rents, impossible to raise a family with the rising prices, too many tourists looking for authenticity, rogue hotels all over the place with local residents quickly being displaced. Last year many Barcelona citizens took to the streets over this issue. Copenhagen has had it with tourists taking over their city as well, and the Danes have sensibly forbidden the sale of seacoast vacation cottages to foreigners. Both cities feel like their residents are being over run and run out by tourists. In one article on Barcelona someone being interviewed spoke of the “theme park” atmosphere, a statement that can be heard on any stoop in New Orleans (or for that matter, seen as a Krewe du Vieux theme).

In a conversation last week someone visiting, and thoroughly enjoying themselves glad to say, said they'd LOVE to buy a place down here “for when they come to visit.” It was a shame because I'd enjoyed our conversation until that point, then out of my mouth came, “Well, we've got a lot of that here. Empty units that are only actually lived in 6 weeks out of the year tops.” Sensing that my mood had darkened a bit, she said, “I'd rent it out when I wasn't here so it wouldn't be EMPTY” <---said very defensively. “To a local who needs a place to live? So what, you'd cable ahead and let them know when you were going to grace us with a visit and they could go, I dunno, camping til you leave?” (Yeah. I know. Rude. Further, she didn't pick up on my use of the arcane “cable” as apparently she hadn't seen enough old movies filled with wealthy folks who cable. Whatever. I was sort of sorry. Until . . .) “No. Of course not. I'd short term rent it so I could guarantee that it would be vacant when I came to visit. I'd NEVER put a local out of a place to live!” <---This said still defensively but brightly as though I was accusing her of being a horridly insensitive landlord, which naturally she wouldn't be. “I see,” I said, “so you'd just permanently put the local out of a place to live.” She stared at me like I had three heads. It had clearly never occurred to her that this was the actual reality. I bought her a drink to smooth the waters but later realized I had only fed the beast with my charm, manners and a change of topic. (“So, how about that Trump!???!”) I thought later that maybe we need to become ruder. A friend, knowing I carry on about this a lot, sent me a link. (This LINK)I followed her directions about clicking and unclicking and was shocked but a tad vindicated. I put in the zipcode box 70117, then moved the map so that most of the French Quarter, Marigny, St. Roch, Bywater and the Lower 9 neighborhoods were visible. I was especially looking in the three areas I'd previously lived. I clicked “Sublets” and unclicked the others. Took a screenshot.

I then reversed it, leaving the zipcode field the same, I clicked “Full Lease” and unclicked the others. Took another screenshot. Then heard a loud OH MY GOD come out of my mouth. Take a look. 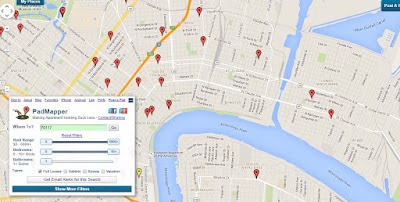 I counted from the mid-point of the Quarter (ignoring the extra sublets that showed up in the Upper Quarter) both times, using the same starting points. Including only those areas that were riverside of I-10 downtown. You can see for yourself. Full Lease count was 12. Sublet count was 35. Nearly 3-1. That should scare the pants off of us.

Councilperson Stacy Head has some suggestions. She'd legalize short term if the owner lived on the premises with some provisos. She seems unaware (benefit of the doubt) that a number of people listing these short term rentals are doing it as a job: posing as a “renter”, signing the lease, promptly turning it into a short term rental with some of these folks having half a dozen of them. (I heard today from someone who deals with rentals a lot that he had rented out a place, the guy looked great on paper and in person, he showed up the next day with an extra key and the place was already tricked out for a bachelorette party scheduled the next day!) Another part of her proposal that baffles me is this:

Should her initial proposal get approved, Head said, she is looking into the more complex issue of whether short-term rentals could be used as a tool to get investors to clean up blighted properties and bring them back into commerce.

One solution to the 10,000 blighted properties in the city could involve allowing people who purchase them and fix them up to fully rent them out to short-term tenants for several years, giving the neighborhoods they are in a chance to stabilize to the point where longer-term rentals are possible, Head said.
And that, in turn, could lead to a situation where it might be less of an issue to ease the restrictions on short-term rentals elsewhere in the city.

“There are so many blighted properties that if all of our efforts to get them into commerce were successful, it’s possible there would be a place for non-owner-occupied short-term rentals,” she said.

I'm trying to wrap my head around this. Let's let people buy blighted properties, fix them up, run them as short term rentals for “several years” (How many years? License them as hotels? Pay hotel taxes? YEARS??) and claims that somehow a zillion people coming and going in that neighborhood for “several years” will “stabilize” the neighborhood. Huh? She follows that up with “that, in turn, could lead to a situation” whereby the city could “ease the restrictions” elsewhere in the city? Sounds like she wants the entire place to be full on the weekends and empty during the week while we all get forced out to Metairie or, I dunno, Dubuque. None of the above makes sense to me, but it would make governance easier with none of us pesky local residents bringing our complaints about the cost of solar trash cans, parking issues, zoning, music or
Posted by Sam Jasper at 10:32 PM 7 comments: