A Life in Byzantium, Courtesy of FEMA and SBA

It's just so bizarre, Byzantine actually. The dictionary offers us this:

Here's a quick sketch of our travels through the safety net of America, of New Orleans after the storm.

We got back to NOLA. No power but phone lines were working. We shared a borrowed generator with our neighbor and rigged up an over the air TV connection. We saw that the President had also borrowed generators, many of them, and had lit St. Louis Cathedral and Jackson Square to great dramatic effect. He made some promises. Friends started calling asking if we'd filed for FEMA yet. No we hadn't. One friend said she'd get online and file for us, got our information and did so. We waited. There were no jobs to be had at that time, money was tight. We'd heard tales of $2000 magically appearing in people's bank accounts. It didn't appear in ours.

Another friend said maybe we didn't answer the questions right. She had gotten the magically appearing sum, and another $2300 or so. The second sum appeared without her having to file more paperwork or rub a magic lamp. She offered to re-file for us. We thanked her profusely and she re-filed.

Then we started the dance. The dance of numbers, the dance of holding, all done with the patient discipline of a boy wooing his first love. "Sorry, you need to call this other number, and please make sure you give them your claim number, your social security number and your disaster number. Oh, you have two claim numbers because of a duplicate claim, and you have two disaster numbers as we've now added Rita to Katrina in terms of aid." My husband dialed the other number, sat on the couch, smoked a couple cigarettes, had a sandwich, read the paper. Three hours of sitting-on-hold later, he was told everything was up in the air because of the duplicate claim numbers and that that had to be fixed first. "Okay," says he, in a polite voice, constantly saying, "Yes, sir," "No, ma'am," furiously scribbling numbers on pieces of paper, "Thank you, ma'am." He'd look at me and say, "It's pending, whatever that means."

This process was repeated for months, with phone calls turning into his weekly visit to the Disaster Center to talk to the FEMA people. With each week that passed, his patience, our patience, grew thinner. There was always a glimmer of hope to be found in statements like, "Fill this out and we'll fax it to headquarters and we should know something in a couple weeks. No, I don't have the authority to make decisions but I can't see anything on your application that would make you ineligible." I went with him on a few occasions, and the workers were sincere, they seemed to want to help, but were unable to accomplish anything without passing it on into the great void of the FEMA bureaucracy. More letters were written, at the behest of the eager-to-help-but-hogtied worker, and faxed off. More ambiguous assurances were given that it would all be taken care of in a "couple of weeks." No one was actually accountable and no one seemed able to actually make a determination.

The next thing we heard was that an inspector was going to come to the house. He came. Nice kid. Did a lot of tapping on his portable computer, asked a lot of questions, smiled a lot. We made sure to answer the questions exactly the same way we had on the form. We didn't want to make the water any muddier. When the smiling child volunteer was asked what we could expect, his answer was, "This should fix it! No problem. You should hear something in a couple weeks." More weeks went by, more visits to FEMA, more papers asked for and given and faxed to the void. We were told we would get a letter in the next week or so. We did. It said, "We have received your documents." That's it. No kidding. That was all it said. 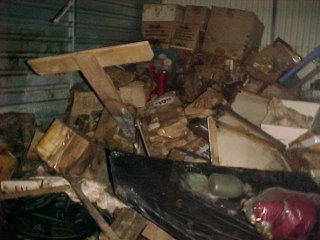 At this point we had finally been given access to our storage unit, which had been under water on Tulane Avenue. Our home had weathered the storm very well, given what happened elsewhere in the city. We were very lucky, but the storage unit was another thing entirely. With no power in there, we slopped through the stuff. Forget all the photos, life memories and books in there. That was the tough part. After collecting books for 22 years, there was significant money being thrown into those dumpsters. But also in all that mess was the washer, the dryer, all of my husband's tools and tool box. Very expensive stuff those tools. Ask us what our Snap On bill was per month as he started buying them years ago for work. The photo above was what our storage unit looked like when we first saw it by flashlight. The boxes were full of photos and books. The washer and dryer, and a huge red tool box were buried under the boxes in the back left section. It took us five visits before we unearthed what was left of them. The photo below shows you what was left. 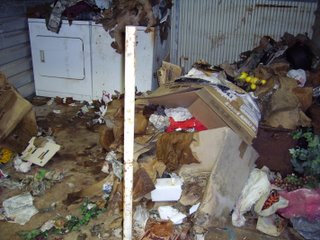 We asked FEMA about the storage contents. We were told they couldn't help us with that as none of the losses were at our primary residence. We needed to go to the SBA for that. Meanwhile, FEMA would keep working on our first paperwork. One week, my husband goes off to do his weekly penance and is told it should be handled by NEXT week. By now it's November. Upon arriving the following week, expecting that this up to now unrequited relationship will be consummated, he's told that "that spigot was turned off last week. You won't be getting it. You can appeal." Having been spurned after so much time and delay and bogus explanations, it became a matter of principle, and we kept at it. Sending whatever they asked for.

Another inspector showed up. I told him I was afraid to say anything to him because every new piece of paper, every new phone call, seemed to screw up the works. He looked at the portable computer he carried and said, "I think I know why this didn't go through. It's the only reason I can think of. Your mailing address is the same as your dwelling." Not knowing what he was talking about, I sat on the couch slackjawed. Finally I got it. If I'd used the address of a friend in another state as my mailing address, there would have been no problem, even though I wasn't AT that other address. Living at the address your mail is delivered to (when it's delivered) was the death knell, or so I was told. Still we kept at it.

We were told to file for an SBA loan for personal property loss. FEMA doesn't handle that, SBA does. It should be a piece of cake. So eight weeks ago, without abdicating anything regarding FEMA, we got all the paperwork together for the SBA including an itemized list of our losses. We didn't inflate anything, we didn't add anything that wasn't in there. They wanted to inspect the damage. UHaul had already cleared it out of the building. What was salvagable was on my front porch. I sent them 20 photographs with captions. It had to suffice. I listed the books, the tools, some furniture, the washer, the dryer. Just the basics knowing that anything else would not be covered. "We can't include the books, they're not essential items." Okay, we'll buy that. "You'll be assigned a loan officer and you should hear something in a couple weeks." Without holding our breath, we were cautiously optimistic.

My husband continued to be in touch with FEMA and now he added the SBA number to his weekly chores. "You'll hear something in 2-3 weeks." It was now March. This Monday he called the SBA again. "It's been assigned. You should be hearing from your officer." Last night, lo and behold, he did hear from our officer.

"I'm recommending that this loan be turned down." He hears this news on his cell phone while walking the dog at 9PM. "Why?" "You don't make enough money and the losses were not in your primary residence." "But FEMA said that was why we should talk to YOU. That they couldn't help with losses that weren't in the primary residence but that you could. And no, we're not making enough money. We live in New Orleans! No one but contractors are making enough money!" "I'm sorry, sir. This will get kicked back to FEMA. They are allowed to give grants."

When he walked in the door, he explained all this to me after mixing a drink. He looked shellshocked. "Where do we go from here?" he said. "I believe they're just trying to wear people down so they give up." I agreed with him. Our story is, unfortunately, not atypical. This kind of nonsense is what will contribute to the population attrition in this city and the delays in rebuilding of lives.

My husband, in his doggedness, will no doubt return to the FEMA lady on Monday.

At that point I think he should ask her if she's being controlled by a powerful, inscrutable eunuch or is she a member of a rival sports faction, because clearly we're dealing with Byzantium, and people with high flown titles unrelated to their actual functions, if any.