Emperor of the World

EDIT 6.29.2010
I just got off the phone with Miss Betty Fox to make sure I was reading this article by Alison Fensterstock correctly. She confirmed that she's going to try. And that means WE have to try. We can't just sit back now and say, "Phew, I'm so glad the Mother-in-Law isn't closing. We have to go OVER there. Spend some MONEY there. She was so ill from stress yesterday that she had to go to the hospital. It's up to us to not just flap our jaws in support. We need to get our butts over there. The events listed at the bottom of this post are STILL ON. That means head on out. Let's support her decision and her courage. She says she doesn't want to let US down. Let's make sure we don't let her down.
________________________

Here in New Orleans we have three images that spring to mind when we hear the word "Mother-in-Law." We have Ernie K-Doe, the singer of that song, both alive and, well, still alive after a fashion. We have the wonderful Miss Antoinette K-Doe, now sadly gone. And we have the Mother-in-Law Lounge, the enduring monument to them both. Never heard of it? Take a look at this, photographed in 2008 by Monique Armstrong:

I went to watch the finale of HBO's Treme with the Emperor of the World and his minions. I got there early to insure having a seat and some of the mean red beans Miss Antoinette's daughter, Miss Betty Fox, makes. Miss Antoinette had once told me you could "cheat" with red beans, didn't have to soak them overnight, just cook them in a roux and they'd be creamy. The red beans were ready when I walked in on Sunday, June 20. Miss Betty was behind the bar. We talked for a long time before others came in. Tears in her eyes as she explained the situation, tears in mine as I listened. The Emperor sat in the corner, taking it all in. 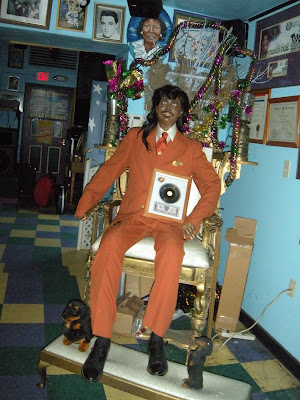 The Mother-in-Law has been in business for 16 years. I've heard many stories about how it started, but they all, in the end, come down to the tenacity of Miss Antoinette. One story goes that the Emperor, for all his flamboyance, was a bit down in the heel when he met Miss Antoinette. She brought him around, probably through a combination of sweet encouragement, love and putting her foot down. She was amazing in her ability to be both forthright and powerful, and playful and loving, sometimes all in a span of ten minutes. The Mother-in-Law opened and became a venue for the Emperor, a gathering place for musicians and Mardi Gras Indians, and Miss Antoinette re-started an old Mardi Gras tradition called the Baby Dolls. There it stood on Claiborne Ave. with history happening inside alongside some rather remarkable photographs, posters, and memorabilia of all types--from precious little angel figurines to a paper mache head of the Emperor himself probably originally on a Mardi Gras float.

Miss Antoinette was a formidable fixture in New Orleans. She is reputed to have gotten more than 50 kids through school using the same combination of encouragement, love and firmness, along with her own two daughters. When the Emperor passed away, he lived on in the form of a mannequin made to look like him, dressed like him, enshrined in the club and occasionally taken to dinner and other social functions. The Emperor-as-mannequin was as familiar a character in the landscape of New Orleans as Miss Antoinette was. If he was wheeled into a club, the crowd parted, smiled widely, and greeted him. It just seemed the polite thing to do.

When Miss Antoinette passed away, the news spread through the streets on Mardi Gras Day. Many, including the group of people I was with, made a pilgrimage to the Mother-in-Law to leave something for her, to pay our respects. There were flowers, notes, candles, beads of course, photographs. I took off my choker and tied it to the front door handles. It was a somber walk home.

From then until now, Miss Betty has tried to keep it open. With regular postings on Facebook and various other special events, the place stayed there, struggled but stayed there, it's murals all cleaned up, the outside garden/shrine full of flower planted bathtubs and toilets kept weeded and watered. Then a car careened off course and straight through the front doors of the club.

After 18 months of living in the club, sleeping on the couch in the main room, working a day job to keep her mother's club viable, that car through the door pretty much broke that proverbial last straw for Miss Betty. Insurance paid the landlord, the door was never fixed and still isn't. The rent had been raised after the storm. Other areas that needed attention for mold or termites leading up to the living area above the club haven't been fixed. Miss Betty has been paying for repairs out of her own pocket and it's clear that she's just plain exhausted.

She is planning to take everything out of the place and put it in storage. She'll probably need some help making sure nothing gets broken--so many frames, so much glass. Her plan is to put it in storage until she can find an affordable place to start a museum to showcase all that memorabilia. Everywhere I go talking about this, people mention having an investor or someone that would buy it up from her to keep it going. She would prefer that no one make that offer to her. She is intent on keeping the K-Doe legacy together and wants to do it on her own terms.

The murals will probably be painted over. Get your photos while you can. There is too much on those walls, inside and out, to be handed over to someone else who might plan on making money off the name.

It will be another loss for New Orleans, but can be a great step forward in Miss Betty's determined quest to keep the legacy alive, while keeping herself from working a day job so that all of us can show up and keep her awake into the night. She's just plain worn out, and I don't blame her one bit for her decision, hard as it is on her.

With her positive outlook, she's planning a couple of events to take the place out in style. 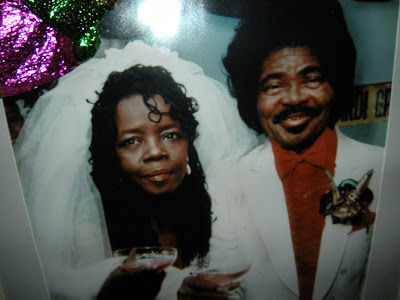 On June 30th, there will be a Celebration of the Lives of Miss Antoinette and Ernie K-Doe starting at 10PM. It will include a vintage radio interview with Ernie K-Doe.

And here's an easy one to remember: 7/10/10 @ 10AM there will be a party, garage sale and silent auctions on many pieces, including, she says, the bathtubs. Clear a space in your yard and bring your money! Bid on something you can say is a true piece of New Orleans history.

Oh yeah, if you have any ideas for affordable spaces for the museum, please contact: Charles Holmes at 504.473.1297.

Miss Betty is gonna need an actual place to live, a real bed, probably some help boxing and storing the memorabilia, and possibly some of us to volunteer to paint over the murals (gulp). I'll double check that with her, but that's what she planned on doing when I talked with her last. If you can help in any of the above things, please call her at 504.236.6086. We all need to pitch in to help her. It's the least we can do for her herculean attempt to keep the Mother-in-Law open for us to enjoy for all this time.
Posted by Sam Jasper at 3:24 PM

Well, crapola, I'm gonna be missing the auction. And I'm going to be missing the Mother-In-Law as well in a huge way, 'cause I've never been able to get over there, and now I never will.

I'll be passing this on.

Preseving a legacy is hard work especially fitting the shoes of the EMPEROR and EMPRESS OF THE UNIVERSE my decision of closing your beloved MOTHER N LAW has been reversed due to all of the heart felt pleas because you guys love this landmark I have decided to give it one last try. I have 2 big events planned JULY 4th G...UITAR LIGHTNING LEE will perform free red beans and rice and of course bar-b-que chicken.

I would like to take this time to thank everyone for their support this year and a half I have been running the lounge, this is one of the hardest task I have ever taken on, but your love,encouragement, and kind words are the reason I have decided not to give up. I sincerely love all of you.Special thanks go out to RODNEY BEALS who has been a true friend from my first step in this process. LOVE YOU ROD!


The garage sale for JULY 9th has been temporarily postponed until a future date that will be announced, again thank you so much for all your support. Don't forget to post your vote for the 4th and 11th event so Miss Betty can know how much to cook for all of you.